Fist and foremost is the Foot Strike.

Unless you are up in the wildness or a desert island then you are likely to be a heel-striker. This means that each time your foot comes into contact with the ground you put on the brakes just slightly until your center of mass gets over and past the midfoot. At that point, gravity starts helping you again with a vector of force that accelerates your forward momentum free of charge. If you are running fast, the slight deceleration that takes place when your heel hits the ground first is not going to be noticeable. However, in a long race, if you end up very fatigued, the braking action of a heel strike is, well, striking and very noticeable. 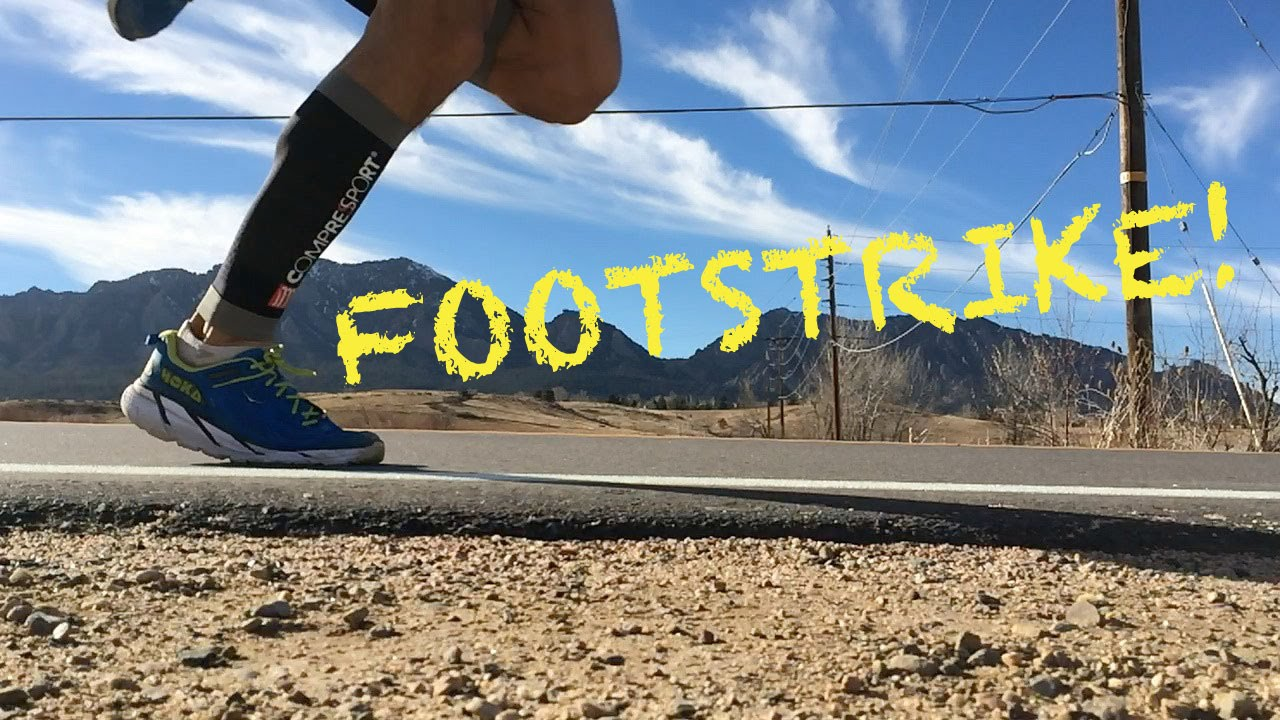 So here’s the drill. Go to a track or grass field if you can’t find a track/have access to one and run a lap or two without shoes or socks. I guarantee that you will instantly start to land on your midfoot or maybe even slightly forward of it.

This subtracts any braking action that a heel strike would have and immediately converts your running form to its most efficient foot plant pattern. Now put the shoes back on and try to continue to run with that same feeling you had without the shoes.

Do this drill daily until you can replicate the midfoot strike and hold it throughout your training runs. Over time this will become your normal run form.

Next and as equally as important is Cadence.

One thing that you will notice after perfecting a midfoot strike is that you get on and off your feet more quickly with each foot plant. This naturally increases your cadence, which is something that will benefit every runner. Elite runners have about the same cadence as top cyclists, hitting the ground about 90 times per minute if strikes are counted on one side. Slower inefficient runners are down around 70-80 foot strikes per minute, which means that they are spending more time on the ground with each foot, and are usually guilty of braking by striking with the heel.

Increasing your cadence starts with getting to a midfoot strike. It is much easier to increase from 80 to 90 strides per minute with a midfoot strike than it is if you are landing heel-first. Generally, heel-strikers end up overstriding, especially when they attempt to go faster or when they try to increase their leg turnover.

Another way to increase your run cadence to that of an elite runner is to carry that same goal over to your cycling. If you are pushing 75 revolutions per minute (rpm) on the bike for hours on end, it will be very tough to get off and suddenly turn your tired legs over at 90 rpm on the run. However, watching your cadence on the bike and keeping it at 90-95 rpm for the bulk of your riding will help carry you to a similar cadence when it’s time to run.

The final tip on foot strike and cadence is to practice it on every run, even your slow recovery runs. Just because you’re running slowly on a recovery day does not mean that you should have a slower cadence or revert to a heel strike.

Next up is the voice of Terrain.

Hills or flat, Roads or trails? These are choices we make when we head out for every run workout. Each has its place and purpose in helping you become a faster runner. Trails have several advantages. The uneven terrain forces your feet and legs to manage some sideways motion and to create stability on the slightly unstable ground. This strengthens lots of smaller support muscles that just don’t get worked by the predictability of pavement. Then, later in a race when you start to fatigue, these small muscles can come into play to help support the larger muscles as they tire, which allows you to maintain good form and stay efficient much longer than if you never do any trail running. A second benefit to trails is that the jarring on your body is less than on pavement, which enables a person to put in more training miles with less breakdown. The net result is more training volume and training consistency with less likelihood of injury.

But there is a reason to run on the roads as well. Unless you are going to be racing on a trail it is important to have your legs adapted to the impact of pavement. Early in my career, I did almost all my run training on trails, especially my longer runs. However, when I got to Ironman I found that running the marathon on pavement caused a huge amount of muscle breakdown, and the critical switch point where the impact surpassed the brain’s override mechanism hit at around the half-marathon point. This meant it became impossible for me to actually run the second half of the run. Finally, in 1989 I figured this out. I gradually transitioned to running more miles on the roads as I got closer to Ironman, so that my leg muscles and joints were adapted to the added impact. The results were profound. I still had some breakdown, but the big impasse where I had struggled in previous years didn’t hit me until I was within a couple of miles of the finish. At that point, the horse could smell the barn and I was able to keep my pace up.

The actual profile of your training terrain is also important. If you have hills in your race, you will want to run them in training. Same for flat courses. Bounding up hills won’t be the most effective way to get you ready to run fast on a dead flat course. A variety of training terrain is ideal for building overall run fitness and also for preventing repetitive motion injuries that running on one single terrain type can cause. As you get close to your key races, a transition to doing around two-thirds of your runs on the terrain that you will encounter on race day. Then split the remaining third of your runs between the two other terrain options (hilly, rolling or flat) that are less a part of your race course profile.